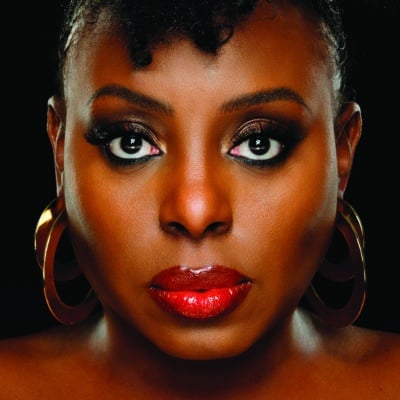 GRAMMY® award winner Ledisi is bringing her fall Tour to the Kalamazoo State Theatre Thursday, November 4 in support for her recent album, The Wild Card!  The album was released in August 2020 on her record label, Listen Back Entertainment, along with BMG.

The tour follows an incredible year for Ledisi, who won her first GRAMMY® for Best Traditional R&B Performance this year. She also scored her first No. 1 spot on Billboard’s Adult R&B Songs for her single “Anything for You”.

“The Wild Card” is Ledisi’s first album released from her own record label Listen Back Entertainment/BMG. Since being free from a record label, Ledisi feels like her own label gives her the power to be independent and make the type of music she wants to create. Her independence is showcased throughout the songs on her album, proving she is a wild card that should be bet on. Being in charge allowed her to have multiple genres on the album, such as jazz, rock, and blues, which came together to create Ledisi’s definition of soul music.

Before her tour begins, Ledisi will be taking her recent PBS special Ledisi Live: A Tribute to Nina Simone to the live stage. There will be performances at Stern Grove Festival in San Francisco and Newport Jazz Festival in Newport, and performances at The Hollywood Bowl in Los Angeles and The Rady Shell in San Diego.

In a business known for its capriciousness, Ledisi’s career has survived and thrived in over two decades. To date, Ledisi has been nominated for thirteen Grammy’s, won three Soul Train Music awards, an NAACP Theater Award and eleven NAACP Image Award nominations. She also has received two LA Alliance Ovation Awards nominations, with one of them being for Best Featured Actress in a Musical. She has headlined two nationally sold-out tours, and performed along artists Dave Matthews, Kelly Clarkson, Vince Gill and Maxwell, Herbie Hancock, and Patti Austin. She will venture into the jazz realm with a new album celebrating the classic music of Nina Simone, Ledisi Sings Nina (July 23/Listen Back & BMG). The multi-faceted artist also continues to act with an upcoming role in the film “Mahalia” and is a published author.

Due to the pandemic, Ledisi was unable to perform her new album live. On now having that opportunity, she says, “After bringing the show to my audience virtually and in a recording, I’m so excited to be back performing the shows live and in person!”

General Ticket Information:
All seating is reserved for this all ages event. There’s an 8 ticket limit.