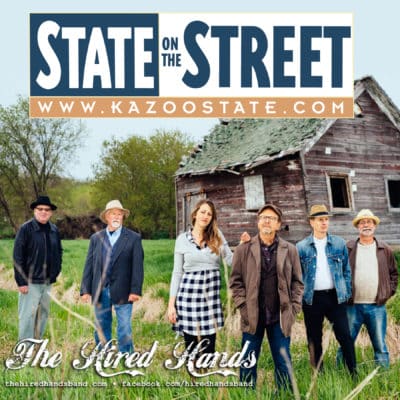 It’s back by popular demand!  Join us outside the historic Kalamazoo State Theatre for State on the Street!  We’ll have free live music from our iconic marquee, drink specials, giveaways and more!

The Hired Hands Band is an acoustic ensemble, hailing from America’s heartland. The band draws from a salty mix of musical interests to produce an eclectic sound that is truly American. The band’s repertoire weaves in and out of many genres, including Blues, Folk, Country, Roots Rock and R&B.

Introducing the Hired Hands Band
Bob Allison sings and plays acoustic guitar for the Hired Hands. Over the past three decades, he has done the same for a wide variety of Country/Rock and Bluegrass bands in the area, most notably the Bluegrass group, Heartland. As a member of the Moody Coyotes, Bob demonstrated an affinity for singer-songwriters of the Folk and Country traditions – interest and talent that are wonderfully compatible with the Hired Hands repertoire.

Bill Hughes is the most schooled musician in the Hired Hands. His band mates often rely upon his expertise to help break down and analyze music when learning new material. Bill learned to play the trombone in his formative years, and eventually chose bass guitar as his instrument of choice. Bill is also the bassist for Kalamazoo favorite, Seventh Son Blues Band. Many moons ago, he also played regularly with another local Blues band, Black Cat Bone. Mr. Hughes has also been known to dip his toes into the Rock, Country and Surf genres too. This versatility makes him a perfect fit for Hired Hands.

Laura Allison-Nicol, Bob’s daughter, learned to sing around the campfire. She was heavily influenced by her Dad’s taste in music. About the time Bob, Dale, and Bill were forming the band that would evolve into the Hired Hands, Laura was singing harmonies for an Alt-Country band in Chicago, called the New 65’s. After sitting in with the Hired Hands here and there for a few years, she decided to formally join in 2015. Her beautiful voice and contributions on the banjo have added new dimensions to the band.

Dale Hein, another veteran musician from Kalamazoo, sings and plays harmonica. In 2010, he ended a 9-year stint with the Blue Moon Blues Band and became a founding member of the Hired Hands. Prior to Blue Moon, Dale played with a several bands in the area, mainly in the Blues genre. He also owned and operated a used record shop in downtown, Kalamazoo during the late 70’s and early 80’s. It is therefore no coincidence that Dale has a huge music collection to complement his eclectic taste in music!

We can’t wait to see you all at this free, outdoor event!

What To Expect:
– Free admission
– Throwback drink specials available to purchase outside of KST
– Enjoy live music from the marquee from 5:30-8:30PM
– KST Box Office and Merch on site
– To-go drinks