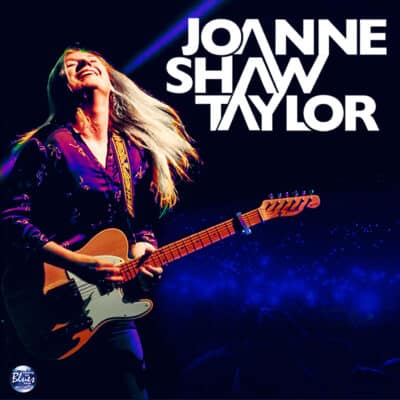 Join #1 Billboard Blues Artist Joanne Shaw Taylor and her amazing band as they perform her highly acclaimed new release, “The Blues Album” from start to finish, along with fan favorites at the historic Kalamazoo State Theatre Wednesday, November 2, 2022!

Lauded as a “monumental concert” by Guitar Player, Blues From The Heart Live will be available as a CD/DVD and CD/Blu-Ray package, including a collectible 24-page CD booklet. Filmed and recorded at The Franklin Theatre just outside of Nashville, Guitarist Magazine calls the film “an explosive outing with plenty of soul and a few guests, too.” Those incredible guest performances include Kenny Wayne Shepherd, Mike Farris and KTBA founder and blues rock titan Joe Bonamassa. Available now HERE.

“It was an incredible evening and a show I’ll never forget,” shares Taylor. “I’m so proud of the film, and I’m honored to have been joined by some of my friends for this special concert.”

The audio was produced by Bonamassa and Josh Smith at Blackbird Studios, Nashville, and was mixed by Kevin Shirley (Led Zeppelin, Iron Maiden) at The Cave, Australia. The video component includes bonus track “I’m No Angel” (not available on the CD) and also a behind the scenes featurette which includes interviews of Joanne and Joe before they took the stage.

Released with the announcement of the film and live album, debut single, “Dyin’ To Know” is available to stream now, along with “Can’t You See What You’re Doing To Me” featuring five-time GRAMMY nominee Kenny Wayne Shepherd.

Joanne Shaw Taylor is a British blues rock singer and guitarist who was discovered by Dave Stewart of the Eurythmics at the age of 16. Taylor has become one of the hottest live acts on the modern Blues scene, and soon you’ll see why. You don’t want to miss Blues Rock Phenom, Joanne Shaw Taylor in this unforgettable night of soul and blues music!

Taylor released her seventh studio full-length record, The Blues Album in 2021. The album was released via Joe Bonamassa’s independent blues label KTBA Records. It was produced and recorded by Joe Bonamassa and Josh Smith at Ocean Way Studios in Nashville, Tennessee.

Watch the music video for Joanne’s latest single, “Dyin’ To Know” from her most recent album, “Blues From The Heart Live”.