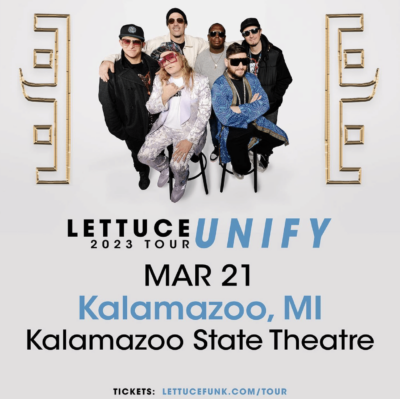 Funk heroes Lettuce make their highly-anticipated return to the historic Kalamazoo State Theatre on Tuesday, March 21, 2023 as part of their UNIFY tour.

Want to be among the first to purchase tickets? Head over to the official Lettuce website or this special page from Seated and enter your information. A unique code will be sent to you before the artist presale begins on Thursday, January 12, at 10AM EST.

“Dealing with the pandemic, being in separate places, trying to survive without our best friends, without touring, not to mention the political divide in this country,” says Lettuce drummer Adam Deitch. “We really needed to unify.”

So, here it is, right on time. Unify. The eighth studio album from Lettuce, it’s also a third consecutive record made at Denver’s Colorado Sound Studios, completing a loose trilogy starting with 2019’s Grammy-nominated Elevate, and continuing with 2020’s Resonate.

It’s, as well, a benchmark moment for the sextet: Adam Deitch (drums), Ryan Zoidis (saxophone), Adam Smirnoff (guitar), Erick Coomes (bass), Nigel Hall (keyboards/vocals), Eric ‘Benny’ Bloom (trumpet).  Approaching thirty years since its humble Boston beginnings, the relentlessly soulful funk outfit has essentially lived on the road, embodying, night after night, the sly wink of its moniker: Let us play!  And now, endorsed on Unify by none other than the legendary icon of funk, Bootsy Collins, singing and playing bass on “Keep That Funk Alive”.

“We dreamed this up when we were teenagers, and here we are. We’re doing it,” says Zoidis.

The roots of Unify took hold several years back, when Lettuce assembled at Colorado Sound to begin work on Elevate. Armed with dozens of songs, the band tracked enough material for that record, its successor, and then some (including a vinyl-only, 45-minute, live-in-the-studio, one-take improvisation, Vibe). A pandemic-abbreviated European tour schedule in 2021 further inspired, as the group traded ideas for more new material.

Combined with some stellar pre-existing tracks held over from the prior two albums, Lettuce was now primed for a third. The group decamped to the Denver studio and reunited with its esteemed engineer, Jesse O’Brien, mixing alongside O’Brien, and, once again, self-producing the finished work. And, rather than extensively road-testing the songs- fleshing out the repertoire in countless performances on tour before being recorded- this time the band discovered the music as much as made it; essentially debuting the new material as they tracked it live in the studio.

A totally collaborative effort, there were exciting cuts full of brilliant lyrics and arrangements from Hall (whom Coomes calls “one of the greatest singers ever”). And fiery horn parts from Bloom.  Plus, the tantalizing prospect of unveiling it all on the upcoming tour. “It’s very, very exciting.  Our audiences are going to hear how we end up interpreting these songs for the first time, in the live form, and then for the 300th time; they’ll get to hear right along with us how the songs will morph and evolve,” says Smirnoff.

Adds Coomes, “We’re just getting tighter and tighter. Really, these are the first records made with the six of us as a team, and it’s the best the band has ever been: live and in the studio; the funkiest and the most fun.”

Epitomizing the funk and the fun, it’s impossible for “Keep That Funk Alive,” not to be a focus track, even on a 16-song album full of highlights. Inspired by a buoyant Bootsy Instagram post, and an irrepressible groove crafted around it. The venerable Parliament-Funkadelic bassist dug the hybridized creation, laying down low end and vocals on the proper track. “It’s such a dream to have one of the inventors of funk music bless this album. We are all STILL in awe!” exclaims the band.

This album is an expression that is pure Lettuce. Unify will teleport you to a funky galaxy far, far away, where all life coexists as one in peace, love, harmony, and music!