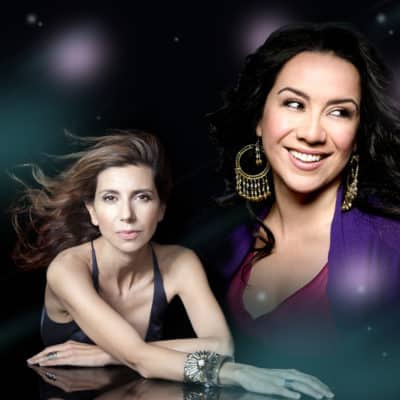 The Kalamazoo State Theatre is proud to celebrate International Women’s Day with livestream performances by Claudia Acuña and Magos Herrera March 6th and March 7th 2021!  Both shows are part of the 2021 International Women Rising Festival being broadcast live from the historic Academy of Music Theatre and will feature afternoon and evening performances.

Latin Grammy Award nominee, Claudia Acuña, presents a two-part musical celebration to mark International Women’s Day. Broadcast live from Northampton’s Academy of Music Theatre, the production features a six-camera shoot to capture the intimacy of her performance and the majesty of this historic opera house. Audience members are invited to join via Zoom so they can “be seen” by the artists on a video wall in the orchestra pit.

Growing up in Chile, Claudia dreamed of performing in the iconic jazz clubs of New York City. She fell in love with this unfamiliar music while listening to international stations on her transistor radio. At age 20, she sold all of her possessions and immigrated to the US with no English and little more than her own ambitions. In a short period of time, she began appearing at jam sessions and gained recognition as one of the most intriguing and original vocalists on the scene. “She sings in the tradition of the great ones.” remarked Abbey Lincoln, “ Her sound is her own.”

Claudia will be joined by Pablo Vergara on piano, Carlos Henderson on bass, Juancho Herrera on guitar, and Rodrigo Recabarren on drums.