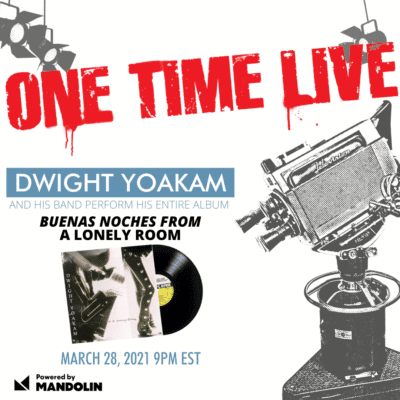 The Kalamazoo State Theatre presents Dwight Yoakam in the first 3 episodes of his new livestream series “One Time Live” MARCH 7th, 14th & 28th. Join the KST alum and GRAMMY-winning entertainment icon as he and his full band perform iconic albums live, from start to finish.

Dwight and his band perform Dwight’s entire revered third album Buenas Noches From A Lonely Room (released 1988), featuring the hit singles “Streets of Bakersfield,” “I Sang Dixie,” and “I Got You.”

Since the start of his music career, Dwight Yoakam has proven he’s more than just another guy with a guitar and a hat. He has risen from hot country star to being one of country music’s biggest influences. While doing that, he has also become a critically acclaimed actor.

In 1993, Dwight released what is considered his masterpiece, the album “This Time.” He supported the album with a tour that lasted over a year and covered the world. In 1994, he received his first Grammy for the album’s single, “Ain’t That Lonely Yet.” In 1996, he co-starred in Billy Bob Thornton’s film Sling Blade (1996). His work as the evil Doyle Hargraves left audiences speechless and critics hailing his performance. Dwight Yoakam has sold 25 million albums worldwide and is two-time Grammy winner.