Stuart MacDonald Winner of Fool Us Starring As… Richard Preston, In Cocktail Capers 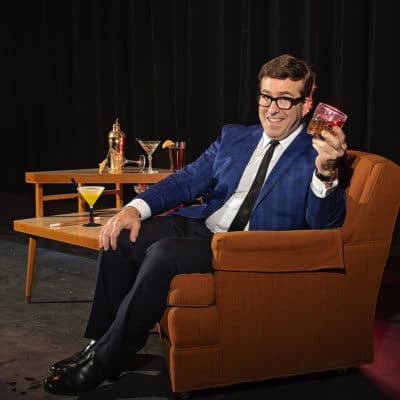 Join the Kalamazoo State Theatre for a night of interactive magic, laughs and family fun!

We are excited to announce a special Livestream performance starring Magician Stuart MacDonald, winner of Penn and Teller Fool Us, International Champion and People’s Choice winner Thursday, 10/22/20 at 7:30pm!

Stuart’s world tour was cut short in March as were all entertainers. With theaters closed and packed houses not in the cards right now, Stuart still wanted a way to support local theaters, so he developed a new show that will take place entirely online.

The show, titled “Richard Preston’s Cocktail Capers” is about Mid-century magician Richard Preston who was cryogenically frozen in 1962 so he could entertain colonists on Mars in 2062. But with everything that’s gone wrong in 2020, world governments voted unanimously to thaw Richard Preston early to bring the world together.

Richard performs his show just like he did on his 1958-62 world tour. The only difference is the setting. It’s a cocktail party with Richard Preston as your host and party magician. The character is a cross between Forrest Gump and Austin Powers. He’s ultra cool and his magic influenced some of the greatest historical events in modern times. Richard’s weaves stories of his amazing past life with his magic to create a one-of-a-kind magic experience.

This show is interactive! Ticket buyers have the chance to be a participant in the show and be part of the magic. Some of the magic Richard (Stuart) performs will happen in the viewer’s mind and in their own hands.

The show is professionally broadcast with 3 cameras, takes place on a set and a handy Zoom expert greets everyone and makes sure their computers are ready for the show.

What You Need To Participate: